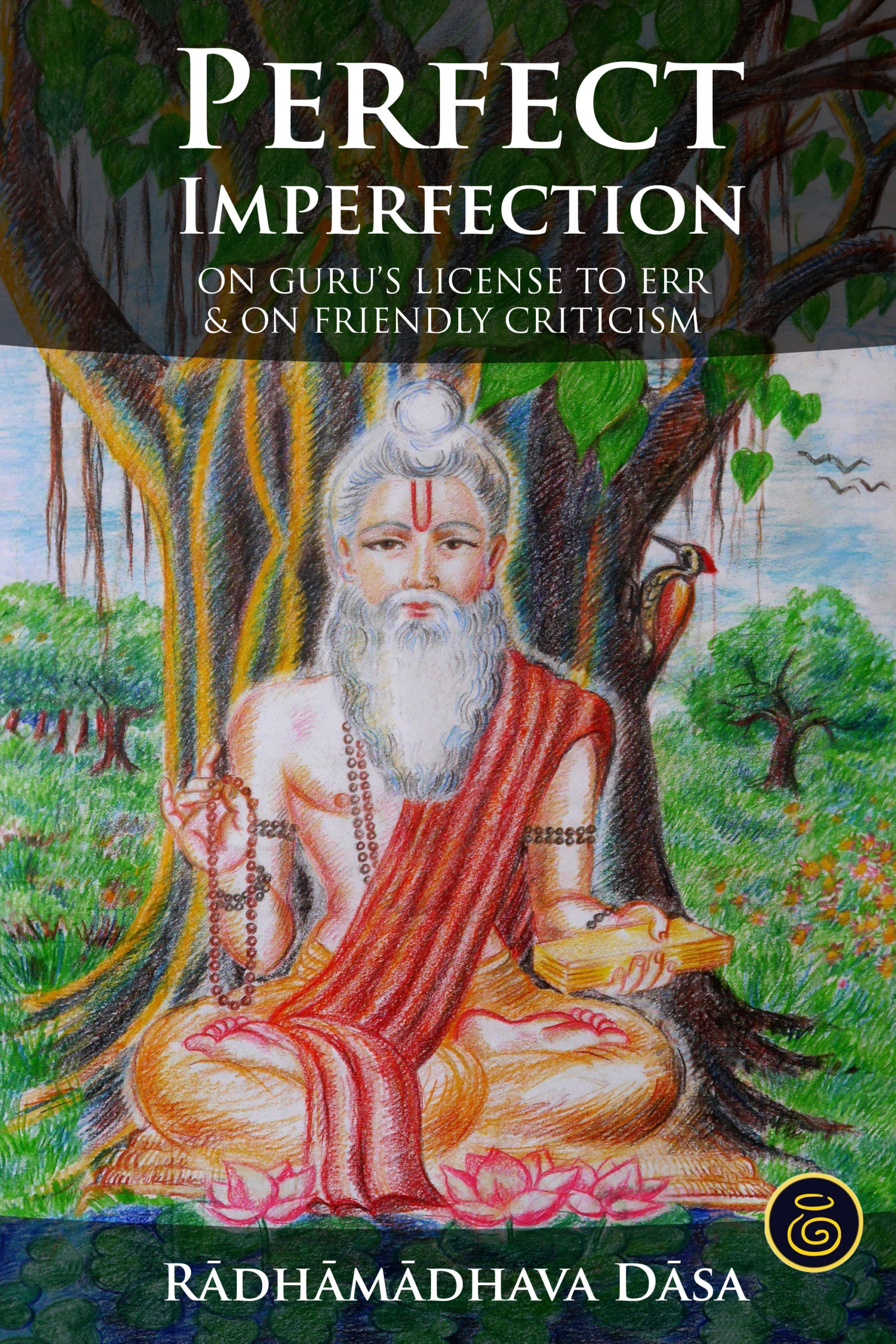 Perfect Imperfection – On Guru’s Licence to Err & On Friendly Criticism

This book establishes with references from scriptures and Acaryas that Guru carries a licence to possess certain mild shortcomings and why it is important to acknowledge this and cater to friendly criticism and correction, wherever it is needed.

It is so far available as an Ebook here:

USA, UK, India. For other countries please try to find it on Amazon (Amazon still hasn’t figured out how to provide one link for all countries).

Did you ever wonder if a pure devotee can make certain mistakes and, if yes, which type of mistakes? How should we act if we encounter them? Were you perhaps told that a pure devotee is infallible, but you were not exactly sure how that applies? Did you ever encounter social stigma when you disagreed with certain opinions or actions of a pure devotee? If you want to achieve more clarity in these and related topics, then Perfect Imperfection is your friend.
This book goes on to show with various references that Guru does not possess blanket (all-in-all) infallibility. Guru, or the pure devotee, possesses a licence to have certain shortcomings – of course within limits and under certain circumstances – which will be carefully lined out.
Why is such a book needed in the first place? Because there is wide-spread confusion about how Guru is infallible. Many believe that Guru has blanket infallibility. This “Infallibility Confusion” can lead to various problems, such as:

The remedy that this book offers is the “Perfect Imperfection Vision”:

These points will be elaborated throughout the book. Just to clarify, we must be careful not to misuse these truths to justify serious contamination of certain devotees, especially those acting as leaders. For grave mistakes there are different considerations. According to Narahari Sarkara, a bewildered or deviating Guru should be privately approached for rectification, and uncorrectable contaminated pseudo-gurus must be rejected and thereafter, one should surrender to a true Guru.

Below listed are the nine major benefits of the Perfect Imperfection Vision after the symptoms of the Infallibility Confusion have been cured.

Chapter Index of the Book

Did you ever wonder if a pure devotee can make certain mistakes? And if yes, which type of mistakes, and how we should act if we encounter them? Were you told that a pure devotee is infallible, but you are not exactly sure how that applies? Did you ever encounter social stigma when you dared embarking into the taboo zone of disagreeing with certain opinions or actions of a pure devotee? If you want to achieve more clarity in these and related topics, then Perfect Imperfection is your friend. (…)

(…) the healthy encouraging logic when speaking to spiritual leaders should be: “Gurus carry a license to make certain mistakes. There are many examples of Gurus making mistakes and rectifying themselves. Hence it is not a threat to you if you too correct yourself. Rather, people will recognize that you are following the path of the genuine Gurus!”

This solution serves as a pragmatic example of how the Perfect Imperfection Vision can heal symptoms of the Infallibility Confusion. (…)

(…) Actually, to think that bhakti depends on mundane perfection means ignoring Her supreme independence. Certain verses admit shortcomings of even our most protected foundation of evidence, namely our śāstra:

“Such transcendental literatures, even though imperfectly composed, are heard, sung and accepted by purified men who are thoroughly honest.” – SB 1.5.11.

We don’t find such self-criticism in Abrahamic scriptures like the Bible or the Quran, which are considered infallible. This makes long-due corrections like admitting that animals have souls and abandoning instructions to kill infidels very difficult. Progressive followers of sanātana-dharma have always welcomed critical thinking and correction. Śrīla Bhaktivinoda Ṭhākura wrote in his original English work The Bhāgavata:

“Our śāstras, or in other words, books of thought, do not contain all that we could get from the infinite Father. No book is without its errors. … We have full liberty to reject the wrong idea, which is not sanctioned by the peace of conscience. Vyāsa was not satisfied with what he collected in the Vedas, arranged in the Purāṇas and composed in the Mahābhārata. The peace of his conscience did not sanction his labors. It told him from inside ‘No, Vyāsa! You can’t rest contented with the erroneous picture of truth which was necessarily presented to you by the sages of by-gone days! You must yourself knock at the door of the inexhaustible store of truth from which the former ages drew their wealth.’ … Vyāsa did it and obtained what he wanted.”

Here we find that Śrīla Bhaktivinoda Ṭhākura had no issue with calling parts of the Purāṇas and the Mahābhārata an “erroneous picture of truth.” Vyāsadeva erred, and his self-correction and reformation took the shape of the Śrīmad-Bhāgavatam, which is a critique of his own previous works. From its very onset, the Śrīmad-Bhāgavatam proclaims that pure devotees can err and that it’s no big deal to discuss their mistakes and correct them. (…)

(…) There are two important points here that we are invited to take home; A) the fact that accounts of pure devotees making mistakes have been included in our holy scriptures makes it clear that it was never a policy that pure devotees should be depicted as infallible, and B) if such great Founder Ācāryas can make mistakes, it is common sense that their successors can do so too. It would be absurd to claim that only today’s Ācāryas have not been granted a license to err.

What to speak of Ācāryas – even entire pure lineages can commit mistakes, as is evident from the pure lineage of Madhvācārya who reject the validity of Lord Brahmā’s bewilderment as mentioned in the Śrīmad Bhāgavatam. It is thus very much possible that – without losing its overall purity – also our entire lineage or religion is wrong about certain things. Knowledge of this fact is crucial for welcoming re-assessment, friendly criticism and reformation, whenever required.

One example of our entire Gauḍīya lineage erring is the universal acceptance of Bahulāṣṭamī (the eighth day of the waning moon in the month of Kārtika) as the appearance day of Rādhākuṇḍa by most of today’s devotees. Recent research has shown that there is no evidence for this and that we don’t know why we have come to this belief[1]. It was found that actually Śrīla Jīva Gosvāmī specified that Ariṣṭāsura was killed on the full-moon night of the month of Caitra (March-April) and that Rādhākuṇḍa manifested on the same spring night. (…)

After establishing that pure devotees are not infallible, we shall now proceed to reestablish that they are nevertheless infallible – however, not in external conduct, but in devotional purity. This not only gives us some soothing relief from the natural discomfort involved in the ongoing discussion, but also an important tool of discrimination. (…)

This chapter offers some more relief by showing how Guru doesn’t make mistakes like ordinary people do. It is natural that we feel that Guru cannot really make a mistake in the sense that he is at fault – and this feeling is perfectly correct. The reconciliation requires an understanding of how Guru can “make a mistake without making a mistake”. (…)

“One should accept the spiritual master not in the sense that the Māyāvādī philosophers do, but in the way recommended here.” (SB 4.28.43, purport.)

He also told his first disciple, Dr. Acharya Prabhakar Mishra, that “only Māyāvādī gurus claim to be omniscient and infallible” and that he was very disturbed when people treated him like a Māyāvādī guru who is held to be infallible. (…)

Now that we have discussed the nature of real perfection, I feel that we are ready to enter the heart of this book. I consider this chapter to be the most important one because it touches on the internal reason why Guru carries a license to err, namely to give us an opportunity for more refined service. (…)

Discovering a devotee’s shortcoming may also provide the delicate service to make others aware of it to enable them to take the necessary steps to deal with it in the best possible way. In any circumstance, it is crucial not to close our eyes on it, but at the same time also not see it with eyes of envy. That’s why this chapter discusses how we can see faults without the attitude of finding faults.

Once, Śrī Īśvara Purī requested Nimāi Paṇḍita to check his book Kṛṣṇa-līlāmṛta for faults (Cb 1.11.103-120). Nimāi first refused by saying, “One who finds fault with a devotee is himself at fault.” But Śrīla Purī Mahārāja insisted. After a few days, Gaurasundara pointed out what He thought was a mistake (Purī Mahārāja then showed how his writing still stood correct). So did Gaurasundara break His own principle by pointing out a mistake? No, because He saw a mistake without trying to find faults. This is the art we need to master. (…)

Once we have learned the importance of recognizing faults and the art to do so free from envy, naturally the question arises if and how we are allowed to inform the devotees or even Gurus who committed a certain mistake. We may recall, as mentioned in the first chapter, that a bewildered or deviating Guru should be privately approached for rectification (Kṛṣṇa-bhajanāmṛta 59-66). In common human language, this is called “criticism”, and there’s nothing dubious about it. However, in the post-modern devotee vocabulary, the word “criticism” has become tainted with so much fear and stigma that it immediately gets associated with offense.

But do pure devotees really welcome friendly criticism? If yes, then we should find examples of how they welcomed it when being criticized and how they have apologized and corrected themselves thereafter. And in deed, we find plenty of such examples.

(…) To summarize: Śāstra at rare times says that Guru is infallible, but we must understand how. What is infallible is the core drive of a pure devotee – his pure desires to serve Kṛṣṇa unconditionally. However, his external conduct may involve mild shortcomings as this is the nature of human-like pastimes. Such mild shortcomings give us an opportunity to prove our unconditional love for him, and should therefore not be seen as a curse, but as a blessing. Guru carries a license to err. If we deny Guru this license, then people lose faith in him as soon as they spot a slight mistake. Guru essentially carries this license to test how unconditional the devotion of her followers is. (…)