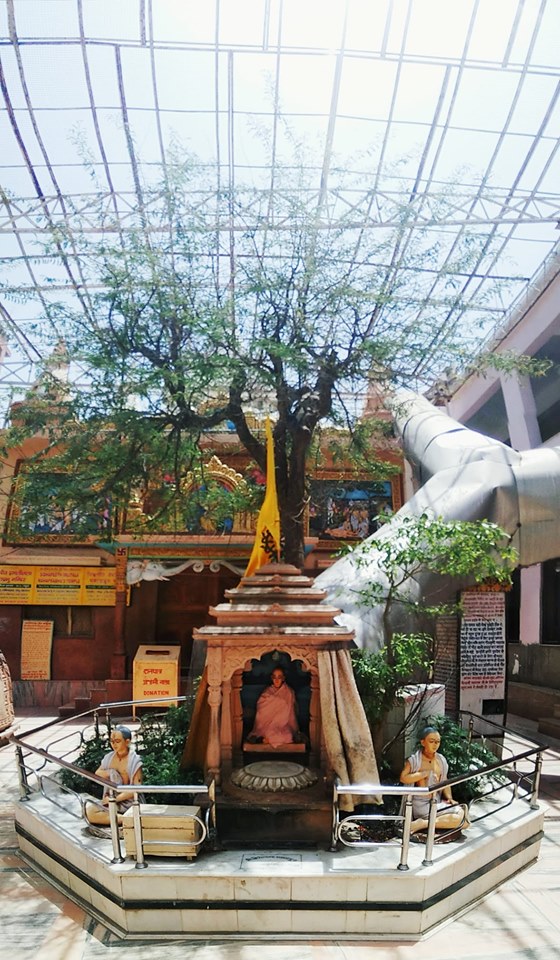 “Imli” means “tamarind tree” and “tala” means “at the base of”. Because Śrī-Śrī Rādhā-Kṛṣṇa and Śrī Caitanya Mahāprabhu performed many amazing līlās under this imli tree, this holy place has come to be known as “Imlitalā.” Imlitalā is counted among Vṛndāvana’s Prācīna-devālayas or most prominent ancient places of worship.

Śrī Caitanya Mahāprabhu arrived in Vṛndāvana on the day of Rāsa pūrṇimā in Kārtika 1515. He daily sat in solitude under this tamarind tree, gazing at the Yamunā and enjoying the divine beauty of Vṛndāvana. He also performed harināma and spread the message of devotion to Śrī Hari to qualified people at this holy place. Śrīla Kṛṣṇadāsa Kavirāja Gosvāmī has described this pastime as follows:

“The next morning, Śrī Caitanya Mahāprabhu returned to Vṛndāvana and took His bath at Cīra-ghāṭa. He then went to Imlitalā (Teṅtulītalā), where He took rest. The tamarind tree was very old, having been there since the time of Lord Kṛṣṇa’s pastimes. Beneath the tree was a dazzling sitting platform. Since the river Yamunā flowed near Imlitalā, a very cool breeze blew there. While there, the Lord saw the sublime beauty of Vṛndāvana and the pristine water of the Yamunā. Before returning to Akrūra-tīrtha to take lunch at noon, Śrī Caitanya Mahāprabhu used to sit beneath the ancient tamarind tree and engage in nāma-saṅkīrtana. Whenever Mahāprabhu would come to Vṛndāvana, He would sit here in solitude until noon.”

“When Śrī Caitanya Mahāprabhu was sitting in solitude under the imli tree and seeing the dancing waves of the Yamunā, He remembered His water-sporting pastimes with the gopīs during His previous Avatāra as Śrī Kṛṣṇa. Embracing the sweetness of Rādhikā’s love in the core of His heart, He entered into rādhikātma-bhāva or empathic union with Her. He thus fulfilled His three internal desires and His heart was completely captured by Rādhārāṇī. Imlitalā is the place of origin of gaura-tattva, for it was here where in Dvāpara-yuga, Śyāmasundara became fully absorbed in the devotional mood of Śrīmatī Rādhārāṇī and became Gaurasundara. I offer my obeisance to that Lord Gaurasundara, who eternally resides in Imlitalā, and who is the abode of prema.”

Over 5000 years ago in Dvāpara-yuga, in Imlitalā, Śrīmati Rādhārāṇī’s supreme victory was celebrated with Her coronation as Vṛndāvaneśvari, the Queen of Vṛndāvana. In Vṛndāvana, the mood of worship is very sweet, because Rādhārāṇī becomes the Supreme Goddess and Kṛṣṇa accepts a role subordinate to Her.

Once, during the performance of Rāsalīlā, Rādhārāṇī was not given Her deserved special attention by Kṛṣṇa. She thus became sulky, left the Rāsa dance and crossed the Yamunā with Her sakhis. In a secluded spot, She sat down and wept. Absorbed in thoughts of Kṛṣṇa, Her empathy with Him reached such an intensity that Her entire body turned blue like Kṛṣṇa. Thus before Kṛṣṇa entered Rādhā’s mood and turned golden, Rādhikā entered into empathy with Him and assumed His dark blue effulgence. Tears cascaded from Her eyes and soon formed a beautiful lake, wich was named Māna sarovar – the lake formed of Rādhā’s tears of māna or sulkiness.

Meanwhile, Kṛṣṇa didn’t feel the usual bliss and realized that His most beloved Rādhārāṇī is missing from the Rāsalīlā. He quickly left the Rāsa dance and began desperately looking for Her everywhere. Unable to find Her, He remembered how She was once crowned the Queen of Vṛndāvana under the tamarind tree in Imlitalā. He thus took shelter of that tree and started crying out, “Rādheee! Rādheee! Please save my life by giving me your darśana!

Rādhārāṇī’s holy name is non-different from Her mood and golden colour. Thus, while chanting Rādhā’s name, Kṛṣṇa soon became immersed into Her mood of service and also attained Her golden effulgence, assuming the golden form of Śrī Caitanya Mahāprabhu! Imlitalā is the holy place where Mahāprabhu’s beautiful form manifested for the very first time. Being immersed in empathy with Rādhārāṇī, Kṛṣṇa got a taste of the glory of Her unparallelled love for Him, of His own sweetness that only She can relish fully and of Her unsurpassed ecstacy when She serves Him. He had thus gotten a taste of fulfilling His three internal desires mentioned by Kṛṣṇadāsa Kavirāja Gosvāmī (Caitanya-caritāmṛta 1.1.6.).

These would later be fulfilled in Purī (dvādaśa vatsara śeṣa rahilā nīlācale (…) āsvādiyā pūrṇa kaila āpana vāñchita – Caitanya-caritāmṛta 1.13.39-43). But even just getting a taste of their fulfillment, Kṛṣṇa entered into a deep state of samādhi and attained a unique siddhi or perfection. This is why Imlitalā is called Siddhapīṭha – holy place of perfection. It is from this seed form of empathic samādhi that Kṛṣṇa’s gaura-līlā exploded infinitely and showered its fruits of gaura-prema on one and all.

On the other side of the Yamunā, Rādhārāṇī suddenly felt deep bliss arising in Her heart due to being immersed in empathic union with Kṛṣṇa. Realizing that He is tasting a very special kind of ecstacy, She was attracted to Imlitalā with Her sakhis and was amazed to find Kṛṣṇa embraced with Her golden effulgence and immersed into a samādhi of empathic union with Her. Usually Kṛṣṇa faints merely by hearing the tinkling sound of Her anklets. But now He was not showing the slightest reaction, altough Rādhārāṇī was standing right in front of Him – such intense was His empathic absorption! One of Her sakhis thus told Rādhārāṇī to snatch back Her mood of devotion from Kṛṣṇa. When She did just that, Gaura-Kṛṣṇa came back to external consciousness, having lost the treasure of rādhā-bhāva. The covering golden effulgence faded and gave way to His blackish colour. The two had a most blissful meeting and were expressing how They are looking forward to continue this Gaura-Kṛṣṇa pastime during Their gaura-līlā in Kali-yuga.

Then, when Kali-yuga arrived, Nityānanda Prabhu came to Imlitalā. He foresaw Mahāprabhu’s arrival and prepared His āsana here. When Mahāprabhu came to Vraja, He spent most of His time on this āsana under this imli tree, chanting Kṛṣṇa-nāma in seclusion. While chanting Kṛṣṇa’s names, due to the seeing the uddīpakas or stimulants of vraja-līlā in Vṛndāvana, for a short time He again turned blackish like Kṛṣṇa and lost the treasure of rādhā-bhāva. To make sure He won’t lose rādhā-bhāva again, He decided to return to Purī, although He had only spent a few months in Vṛndāvana. This is the confidential reason why Mahāprabhu performed His concluding pastime in Purī.

Sevakuñja is accepted as the heart of Vṛndāvana because here Kṛṣṇa attains the treasure of His heart – the service of Rādhārāṇī’s lotus feet. However, nobody can serve without the proper mood of service – especially not Kṛṣṇa, who is used to being ādi-puruṣaṁ, the supreme enjoyer. He has to first attain seva-bhāva, the mood of service. And for that He first comes to Imlitalā before He enters Sevakuñja. In the same mood, according to local tradition, pilgrims first have darśana of Imlitalā before entering Sevakuñja.

Some say that relishing the Imlitalā pastimes was the internal reason for Mahāprabhu’s coming to Vṛndāvana. Under the very same imli tree, Srila Sanātana Gosvāmī worshiped his beautiful Gaura-Nityānanda Deities, which now grace the left altar in the Imlitalā temple. In the centre of the altar there is the Mahāprabhu Deity who was personally installed by Śrīla Bhaktisiddhanta Sarasvatī Prabhupāda and lead all of his early Vraja-maṇḍala parikramās. Imlitalā was so dear to Śrīla Prabhupāda that he once said: “I am living eternally at Imlitalā!”

There is a little known book in Bengali called Imlitalā Mahātmya written by the Founder Ācārya of the Śrī Gauḍīya Saṅgha and Sevait of Imlitalā, Śrīla Bhakti Saraṅga Gosvāmī Mahārāja. We are happy to announce that it has now been translated into English and that it will soon be published. Also, a book called Yoga of Empathy by Radhamadhav Das is in the making and will dwelve deeper into the topic of empathic union. Both publications will be announced here on www.nectarpot.com. 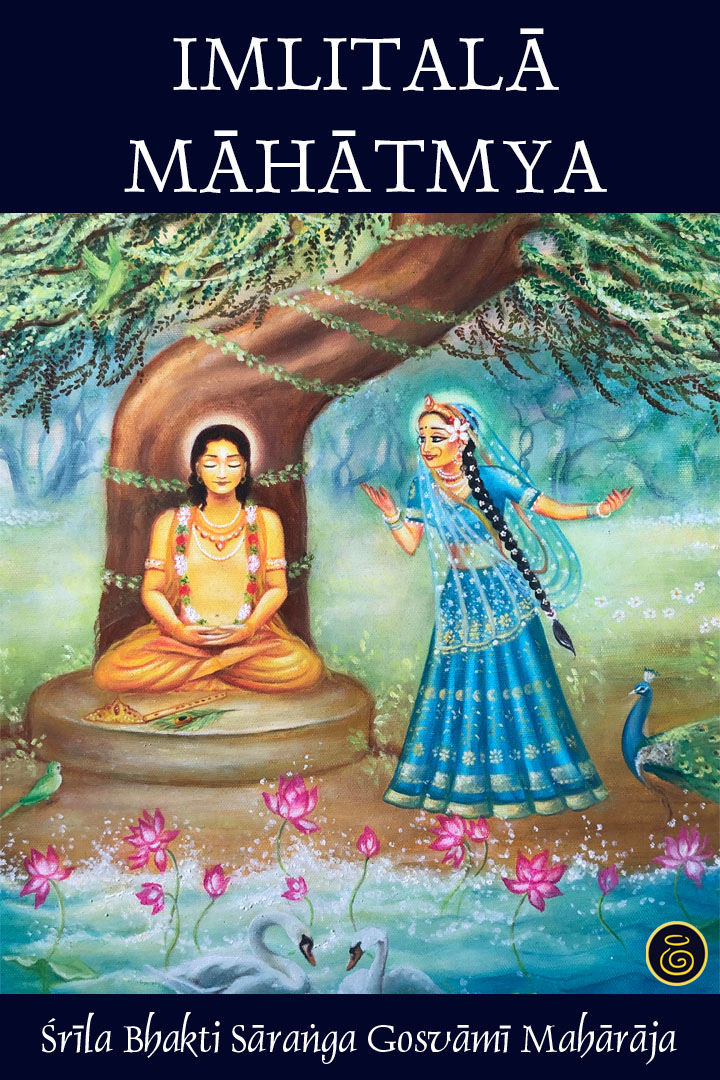 You can read more about Imlitalā in the wonderful book “Imlitalā Mahātmya” by Śrīla Bhakti Saraṅga Gosvāmī Mahārāja. It is available here for download as an Ebook in English:

USA and India. For other countries please search for “Imlitalā Mahātmya” (with diacritics!) in your preferred Amazon website or app.

Have you heard that, for the Gauḍīya-Vaiṣṇavas, among all the pastime places of Lord Kṛṣṇa in Vṛndāvana, Imlitalā is the most esoteric līlā-pīṭha, vital holy pastime place? And were you aware that Imlitalā is called “Siddhapīṭha,” a holy place of perfection, because it grants perfection not only to devotees but even to Śrī Kṛṣṇa Himself?
Although Imlitalā is Mahāprabhu’s own preferred place in Vraja and counted among Vṛndāvana’s prācīn-devālayas, or most prominent ancient places of worship, many devotees across the globe are still unaware of its excellence. We hope to please Śrī-Śrī Guru-Gaurāṅga by making the glories of Imlitalā widely available in English.
Without a doubt, Imlitalā is one of the most esoteric holy places. In Imlitalā, in Dvāpara-yuga, Śrīmatī Rādhārāṇī’s supreme victory was celebrated with Her coronation as the Queen of Vṛndāvana. Thereafter, under the same imli tree, for the very first time, Kṛṣṇa attained the perfection of fulfilling His three internal desires – He became immersed in rādhā-mahābhāva-tadātmika-samādhī, or full empathic immersion in the devotional mood of Rādhā, and thus assumed the golden form of Śrī Caitanya Mahāprabhu. Also, at Imlitalā, He attained a deeper entry to Sevā-kuñja, the heart of Vṛndāvana.
Then, much later, in Kali-yuga, Nityānanda Prabhu foresaw Mahāprabhu’s arrival and prepared an āsana or sacred seat for Him here. When Mahāprabhu came to Vraja, He spent most of His time in seclusion under this imli tree, chanting Kṛṣṇa-nāma on the āsana lovingly prepared by Nityānanda Prabhu.
On one unique occasion, our beloved golden Lord even again turned blackish here. Some say that relishing the Imlitalā pastimes was the internal reason for Mahāprabhu’s coming to Vṛndāvana. Under the very same imli tree, Śrīla Sanātana Gosvāmī worshiped his beautiful Gaura-Nityānanda Deities. Imlitalā was so dear to Śrīla Bhaktisiddhānta Sarasvatī Prabhupāda that he once said:
“I am living eternally at Imlitalā.”
This book, Imlitalā Mahātmyā, is now translated from the original Bengali book by Śrīla Bhakti Sāraṅga Gosvāmī Mahārāja. For those who don’t know the author, he was one of the stalwart disciples of Śrīla Bhaktisiddhānta Sarasvatī Ṭhākura Prabhupāda. When he was with his Gurudeva, he was still a householder, and his name was “Bhakti Sāraṅga Dāsa.” Śrī Bhakti Sāraṅga Prabhu served as the secretary of the Viśva Vaiṣṇava Rāja Sabhā (the World Vaiṣṇava Association, founded by Śrī Jīva Gosvāmī) and as the director of the Gauḍīya magazine, established by Śrīla Prabhupāda. He was also in charge of the vraja-maṇḍala parikramā.
The Mahāprabhu Deity in the centre of the altar in Imlitalā was installed by Śrīla Prabhupāda and used to lead those parikramās. This is how this Deity came to Imlitalā. Śrīla Prabhupāda said about Śrī Bhakti Sāraṅga Prabhu:
“Śrīman Mahāprabhu has sent one of His close associates to assist us.”
(From the Introduction.)
This English edition comes with a commentary by Rādhamādhava Dāsa that expounds on the glories of Imlitalā with further insights from various sources. For example, can you imagine, that the already perfected Kṛṣṇa again becomes a sādhaka, and that too with great pleasure? All this will be revealed in this book. Here’s a sample:
“In Imlitalā, the siddha Kṛṣṇa becomes a sādhaka and a disciple and sevaka of Rādhikā, and He finds ultimate perfection in this state of consciousness!” (Chapt. 2.5)

If you feel inspired to be part of this service you can do so by helping with translation, printing and distribution. Just drop us an email here. You can also offer a donation. If sufficient funds are raised, we can release the Ebook for free reading.

Guided Darshans of Imlitalā and Sevakunja
Gaudiya Sangha in Delhi

How to Get There

Imlitalā lies between the Madan-Mohan temple and Keshi Ghat on the banks of the Yamunā. It belongs to Sevakunja. You can walk there or take a bicycle or E-rikshaw. Cars are not recommended because they disturb the peace of the pilgrims.